Dentists across the country are grappling with questions about vaping. Could vaping be the missing piece that helps patients quit smoking once and for all? Is vaping really less harmful than smoking cigarettes?

Opinions run the gamut. Some dentists think smokers who switch to vaping are simply trading one set of harmful chemicals for another, while other dental providers don’t know what to think.

Even dentists who believe vaping is a healthier alternative to smoking are still uneasy about saying so to their smoking patients. Because there is a lot of skepticism when it comes to tobacco and vaping companies, explains Jamie Collins, a hygienist in Idaho and Washington and a dental health educator who has written extensively about vaping.

“Think about advertisements years ago that featured pregnant women smoking cigarettes saying, ‘I do it for my health,’“ Collins says. “And we now know the incredible harm that smoking causes to people’s bodies. So dentists are afraid to recommend vaping to smokers, because we don’t know the long-term effects of vaping yet.” 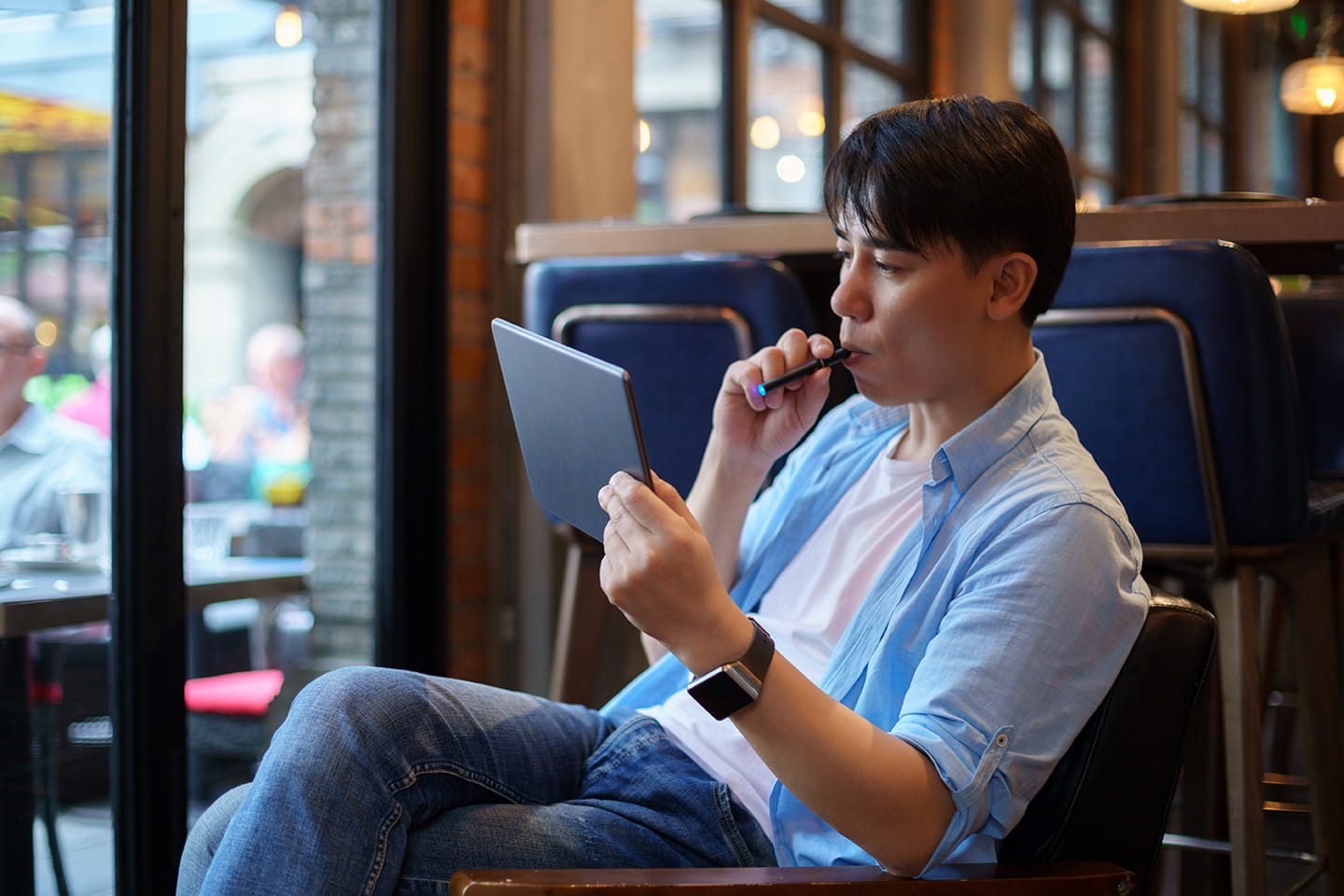 Then there is the likelihood that dentists are not aware that their patients have started vaping. Patients who vape don’t have any of the telltale signs of cigarettes like a lingering odor or yellowing teeth. And because many people believe that vaping isn’t really smoking. This is certainly the message conveyed in popular vaping advertisements.

“I hear this all the time - ’I don’t smoke - I vape,’” Collins says. “Because these devices are being marketed that way.”

If patients don’t think they are smoking, they aren’t likely to report it on a doctor’s health history form or even think to tell their dentist.

Unless a dentist happens to notice a vaping device sticking out of a patient’s pocket or purse – they will likely miss it. And that means a missed opportunity to catch oral problems associated with vaping in the early stages, Collins says.

While the number of smokers has been on a decline in recent years, there are conflicting reports on whether vaping is helping smokers quit or adding to the problem. Many smokers who took up vaping as a cessation tool end up using both, vaping in public because it doesn’t have the social stigma associated with it, and smoking cigarettes in private.

Several of the hottest selling vaping pods contain 5 percent nicotine, the equivalent of a pack of 20 cigarettes. The problem with dual usage is smokers could be consuming significantly more nicotine.

The magnetic appeal of vaping among teens, tweens and young adults cannot be overstated, nor can the role that social media has played with this age group. Instagram and YouTube have transformed young adults into social media celebrities. Social media hosts feature videos comparing the quality of vaping products, reminiscent of wine experts and cigar aficionados. Especially popular are young people who conjure up elaborate moving shapes with vaping smoke, racking up 2 – 4 million views per video in as little as a month.

Today, the fastest growing market in vaping is consumers in middle school, high school and young adults. While the long term effects of vaping are still unknown, some dentists are saying they expect to see the effects in the mouths of this generation for decades.

Complicating the vaping question are a number of conflicting messages from respected public health and medical organizations.

A recent study by Public Health England states that vaping is 95 percent less harmful than tobacco. PHE has followed this up with a TV and social media campaign promoting e-cigarettes to smokers.

In contrast, a report in JAMA Network Open found that American teens who use e-cigarettes are 3 times more likely to try regular cigarettes. Moreover, e-cigarettes have been linked to strokes, heart attacks and coronary artery disease, according to a study by the University of Kansas in Wichita.

Dr. Ian Landesman, a dentist at Slidell Family Dentistry in Louisiana, has noticed that people are vaping and consuming high energy drinks together. Since a side effect of vaping is dry mouth, and energy drinks are full of sugar, tooth decay takes hold much faster.

"We are seeing wraparound decay on lower anterior teeth, which usually never get cavities, because the saliva pools there and buffers the sugar and acid away,” Dr. Landesman says. “Lots of vaping juice reduces saliva and causes dry mouth. Combined with sipping energy drinks, these teeth are swimming in sugar and acid instead of saliva, and they quickly decay."

The rise in vaping

In the U.S. market, nearly 7 million adults currently used e-cigarette in 2017, according to a CDC report. And another survey reported 3.6 million current users in middle and high school in 2018.

As the tobacco industry continues to make big investments in the e-cigarette business, economic forecasts predict the global vaping market to nearly double in size by 2023.

All this means is that dentists who already feel like a deer in headlights on the vaping issue, it’s likely to get worse.

*Hyperlinks to third-party websites are offered for informational purposes only. Unum in no way controls, guarantees, endorses, sponsors or promotes these websites or their content.

Dental therapy dogs: the new superheroes at the dentist

Unum Group provides a broad portfolio of financial protection benefits and services through the workplace, and is the leading provider of disability income protection worldwide. Through its Unum US, Unum UK, Unum Poland, and Colonial Life businesses, the company provides disability, life, accident, critical illness, dental and vision benefits that protect millions of working people and their families. Unum also provides leave and absence management services that streamline the leave experience for employers and employees, and stop-loss coverage to help self-insured employers protect against medical costs. Unum reported revenues of $12 billion in 2019 and paid $7.5 billion in benefits.