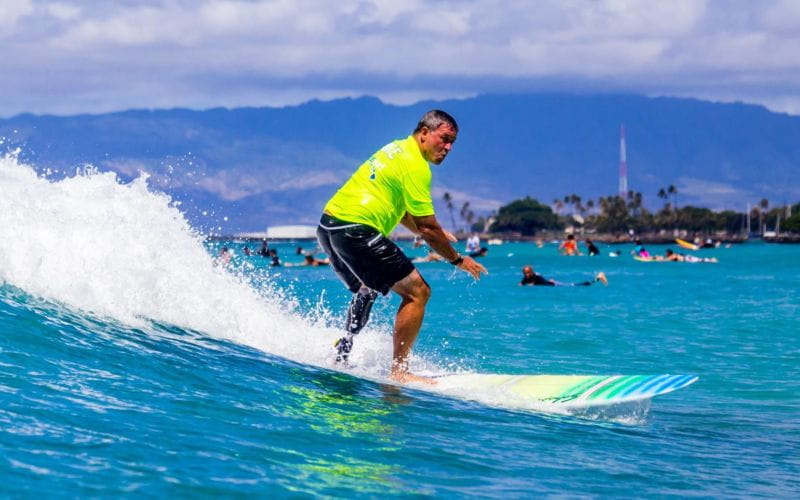 Two years ago, severely depressed and immobile, David Conner longed for the life he once knew. In particular, he missed the ocean, and the joy of surfing the coastal waters off Hawaii.

Today, David is a member of Hawaii’s adaptive surf team and a supporter of AccesSurf, which helps children and adults with disabilities enjoy the water.

“I don’t feel like I have a disability when I’m in the water, I feel strong and confident,” he said.

David’s story of recovery and strength began in 2015, when he was at the job he’s done for 25 years. As a department manager for a large retailer, his job included making sure the warehouse was stocked with enough products to serve its customers.

On this day, he was checking on an area that had fallen behind when he was struck by a forklift.

“My foot wasn’t crushed or anything like that, but I still knew it wasn’t good,” David recalled. “I suffered what’s called a degloving injury.”

Degloving injuries occur when the skin is separated from the underlying bones, muscles and tissues. Treating these types of injuries is complicated and at times tough decisions must be made, including amputation.

“My doctors tried a skin graft and about seven other procedures over about two months,” David said. “It was excruciatingly painful and nothing worked. I was finally sent home from the hospital and had to wait two more months for another attempt at a skin graft.”

Bed-ridden, in chronic pain and depressed, he felt like his life was over. After the second skin graft didn’t take, he and his doctor discussed his options.

“I could go through more surgeries that may heal my wound, but I still had nerve damage, severe foot drop and my leg had atrophied,” he said. “And there was no guarantee that those issues would get any better. I didn’t hesitate, I decided to amputate. I was immediately at peace with the decision, and that night I got the best sleep I’d had in six or seven months.”

But David’s ordeal was far from over. In 2016, after his foot was amputated, he had to focus on how to walk again using the prosthetic equipment he’d need to get back to his old way of life. There was a lot to worry about.

But David’s financial stability wasn’t one of those worries. Although he was out of work, David’s income was protected by the short and long term disability benefits he received from Unum. David also had dismemberment coverage and received a benefit after his accident.

“I owe everyone at Unum a lot of thanks,” David said. “There were so many things I didn’t know about my coverage, and they took great care explaining everything to me. It was such a relief to know I’d have money coming in to pay my mortgage and take care of my family.”

David went back to work about three months after the amputation, and learned a valuable lesson: as an amputee, you have to be patient.

“I wasn’t physically or mentally ready, so I left work for about a year,” he said. “I’m back now working three days a week, which has been great, especially for my mind. It’s nice to have that part of my routine back again.”

Even better, David is surfing again.

His involvement with AccesSurf, in particular, has inspired him. “It’s amazing what the water can do for people with physical challenges, and I’m looking forward to getting more involved with the organization to help others participate in adaptive sports.”

David hasn’t looked back since he chose to amputate his foot. As a member of Hawaii’s adaptive surf team, he’s looking forward to competing with other physically challenged surfers from around the world.

“I’m definitely OK with where I am in life, and while I’m grateful for the support I received from the people at Unum, I hope I never have to deal with them again,” he said with a laugh.

This article was originally published on WorkWell.

Brian has been in the communications business for more than 15 years, getting his feet wet in the Big Apple before returning to his Southern roots. From buying media for AT&T to running traditional public relations campaigns for Mayfield Milk, he’s worked with brands with vastly different audiences and stories to tell. As a corporate communications manager for Unum and contributor of WorkWell, he gets to inform consumers on the importance of voluntary benefits and share ideas for improving their work productivity and tips for living a healthier lifestyle.

Away from work, Brian spends as much time as he can with his family. When he’s not watching his kids play sports, helping with homework or supporting his wife's racing on the USA Paratriathlon Team, he enjoys running and cycling in beautiful Chattanooga.

Unum Group provides a broad portfolio of financial protection benefits and services through the workplace, and is the leading provider of disability income protection worldwide. Through its Unum US, Unum UK, Unum Poland, and Colonial Life businesses, the company provides disability, life, accident, critical illness, dental and vision benefits that protect millions of working people and their families. Unum also provides leave and absence management services that streamline the leave experience for employers and employees, and stop-loss coverage to help self-insured employers protect against medical costs. Unum reported revenues of $11.6 billion in 2018 and paid $7.2 billion in benefits.